In Remembrance of Betty Jones 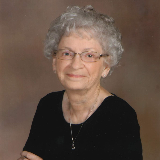 She was born on June 21, 1930, to Edward and Ethel Edith (Johnson) Lewellen in Kingston, MO. Betty grew up in Caldwell County Missouri in the community of Far West. She later graduated from Northeast High School in Kansas City, MO.

On October 28, 1951, she was united in marriage to Eben Jones. After their marriage they lived in Hamilton, MO, Gower, MO and later settled in Kearney, MO where they made their home. Eben passed away on January 10, 2000.

Betty held a variety of jobs throughout her life including secretary, bakery, café owner, antique store owner and most of all she loved being an Avon Representative.

She was a member of the VFW Auxiliary and the Kearney United Methodist Church where she volunteered and stayed active with both.

Betty was preceded in death by her husband Eben Jones, her parents Ed and Ethel Lewellen and numerous half brothers and sisters.