In Remembrance of Betty Johnson 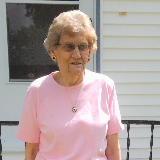 She was born on February 6, 1929, to James and Opal (Young) Ratliff in Smithville, MO where she grew up and graduated from Smithville High School.

On June 5, 1948, she was united in marriage to Earl Dean Johnson. After their marriage they lived in Smithville, MO where they made their home. Dean passed away on December 17, 2002.

Betty retired from AT&T in 1986. She enjoyed antiquing, collecting, reading, crocheting and planting her flowers. Most of all, Betty loved being a mom to her 6 boys and became an avid sports fan from watching her boys compete. There is a special place in heaven for a mom with 6 boys.

She was preceded in death by her parents James and Opal Ratliff; her husband Dean Johnson; her son Robert Dean Johnson; and her brother James Ratliff, Jr.