In Remembrance of Betty E. Hendrix 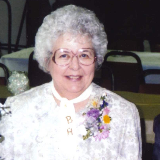 On March 5, 1949, Betty was united in marriage to Oliver Faye Hendrix. They then lived in Belmond, IA, Leon, IA, Council Bluffs, IA, Kansas City, MO and in 1964 they moved to rural Dearborn. Dearborn is where they settled for the rest of their lives, where they raised their four children, Dennis, Randal, Ricky, and Sandra and two of their grandchildren, Rachel and Ryan. For 40 years, they had children that attended school.

Betty was a devoted Christian Woman who loved Christ. She was a member of the Mt. Zion Baptist Church.

Betty was the matriarch of the family, who was the keeper of her husband, home, farm and family. She enjoyed mowing the farm on her riding mower. She drove tractors, planted gardens, canned food, and grew plants and flowers. Every moment Betty was thinking about her family and friends, how to help them, what she could do to be sure everyone had what they needed, no matter how hard times were or how old they were.

She could not pass up a garage sale. She collected bells and any type of dolls she seen. Betty enjoyed spending time with her grandchildren and great-grandchildren. Her faith in Christ, her love for Oliver, her family and home were everything to Betty. Betty was ready to meet her Lord with the strength of her faith and love of her family.

Donations may be made to the church or the cemetery.