In Remembrance of Barbara Ann Newman 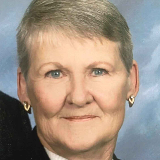 She was born on October 17, 1936, to Basil Kermit and Helen Elsie (Cromer) Hersey in Sarcoxie, MO Barbara grew up and attended school in Ritchey, MO.

On September 3, 1955, Barbara married Jerry Applequist and they had three children Vicki, Dru and Susan. On November 8, 1968, she was united in marriage to Lloyd Allen Newman. After their marriage they lived in Weatherby Lake and in 1983 they moved to Farley, MO where they made their home. Lloyd passed away on August 24, 2013.

Barbara was a member of the First Baptist Church in Platte City. She enjoyed spending time with her family, especially her grandchildren.

Donations may be made to Traditions Hospice.