In Remembrance of Atina Barnett 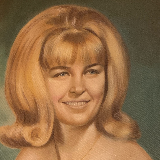 She was born on May 20, 1946 to Leonard Albert Sr. and Josie Irene (Dolbow) Sessions in Kansas City. Atina attended school in Grayson, Gower and North Platte.

Atina worked at Harmer’s Café in Edgerton, and the Smithville Convalescent Center where she received her CMT and CNA.