In Remembrance of Ann Coleman 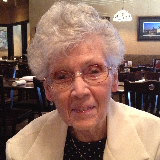 She was born on March 8, 1927 to Stanford Lee “Dick” and Ruth (Morris) Ferguson in Independence, MO. Ann grew up in Kearney and Smithville, and graduated from Smithville High School.

On August 20, 1950 she was united in marriage to Donald Jesse Coleman. After their marriage they lived in Smithville where they made their home. Her husband passed away on July 10, 2010.

In earlier years, Ann worked as a lab technician at Spelman Memorial Hospital in Smithville. Ann and Donald owned and operated A&D Upholstery in Smithville for many years.

She was a member of the Church of God-Kansas City. In her free time, Ann enjoyed researching family history, camping, cooking, sewing and painting.

Ann was also preceded in death by her parents; siblings, twins Lelah and Leonard, Morris Ferguson and wife Juanita and Kenneth Ferguson.

Funeral Service: 2:00 p.m. Monday, January 20th at Hixson-Klein Funeral Home in Smithville with visitation one hour prior to the service.

Donations may be made to Megan’s Paws and Claws. (Checks payable to City of Smithville)