In Remembrance of Alvin E. Kelley 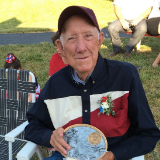 He was born on July 11, 1925 to Ermon Wesley and Neva Flora (Ruble) Kelley in Rushville, MO where he grew up and attended school. He then served his country in the US Navy in the South Pacific during WWII. After his honorable discharge he returned to Rushville, MO.

On October 9, 1948 he was united in marriage to June Lovelace. After their marriage they lived near DeKalb, MO and in 1953 they moved near Camden Point. In 1993 they moved to rural Weston where they made their home. June passed on January 24, 1999.

He was also preceded in death by his parents, his brothers Alfred, Donald and Arvin Kelley and sisters Mary Sue Munsterman, Maxine Palmer, and Ermadean Brown.

Visitation from 4:00-7:00 p.m. with Funeral Services at 7:00 p.m. with Military Honors, Monday July 22nd at the Dearborn Community Center in Dearborn.

Donations may be made to the Pleasant Ridge Cemetery.